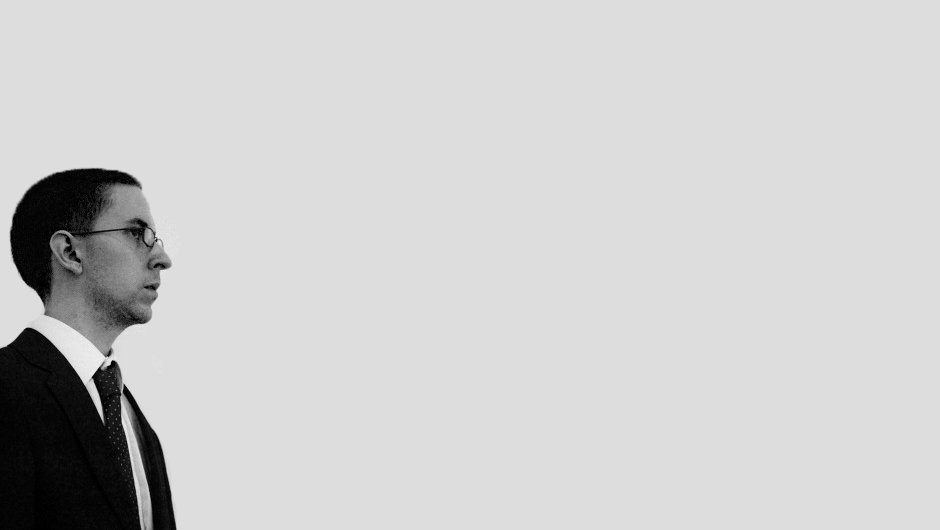 My music – suggestive, with preferably more for the performer than the audience.  I actively want the majority of people to dislike my music, or, more accurately, distrust what they hear – which is more than just turning a negative into a positive, I just have a different idea of perfection.  I have used chance procedures, graphic notation, textual and theatrical instruction both bizarre and traditional. I think I’m still a way off writing the music I really want to write.  I love notes, I can’t think of a better way to spend my time doodling impossible lines of music, pushing a fragment of material to its exhaustion, delighting myself in symmetries (broken and total), patterns and relationships.  Toying with probability assists inspiration, I keep dice and bingo balls on my desk, along with scrabble tiles and containers of pitches, waiting to be plucked out and written down.  I recall hearing Richard Ayres say that every piece written is part of a larger piece and I share this sentiment.  They also tell a story – I consider my titles very deeply – I’ve recently been sitting on a piece which is musically finished but without a name, it could be months before I discover the right one, but I consider it an extension of the composition.  I’m currently interested in durational, electronic and complex music.

My poetry can be described technically as experimental, conceptual, visual and mildly concrete.  I think of it as ‘extreme editing’ and simplification of pre-existing texts.  Assonance, consonance and alliteration interest me, as do any groupings of words with something in common.  I feel similarly about letters as I do with notes, except that more often than not, my poems come out of other works.  Kenneth Goldsmith once commented that you need not read his books if you know what they are about – it is the same with my pieces, although I am aware that many people have read my pieces in full and I’m sure there are some nutters out there who have read his, for the challenge and just to say they have!  It was Mr Goldsmith’s suggestion to me that I do something that takes a whole year.  This simple enough advice spawned a new way of thinking and in homage, I have created several pieces using newspapers which collectively spent around two thousand hours of lugubriously laborious work.  This long process, high input method has become my way – it allows me to work whilst ‘switched off’ – I seem to get most inspired about where a piece might go when I am working in this way.  There are too numerous pieces to list here, but many can be seen here: www.scribd.com/matthewleeknowles

I have performed in many, many concerts of all kinds, too numerous to list here and so it has always been a normal fixation, full of the familiar butterflies and usual customs.  I’m particularly fascinated by the everyday, the journeys people make, the things people do when they are not aware they are being watched, I’m a voyeur I suppose.  One of the greatest plays ever written is by Peter Handke called “The hour we knew nothing of each other” – hundreds of non speaking characters crossing the stage – utter sadness, brilliant humour, titanic intrigue and vociferous mystery.  My first global event (six_events, 2008) had people doing things that an observer would not identify as ‘performance art’, in fact they probably wouldn’t notice the person at all, life and art were effectively indistinguishable, audience boundaries were crossed and roles were questioned.  This interest of mine really goes back to Cage’s 4`33“ composition – it’s everywhere, it’s happening right now.  In 2009 I joined with friends/composers Neil Luck and Josh Kaye to form KLK, with an intention of performing spoken word material that is indistinguishable from, and containing all the nuances of music – simultaneously familiar and alien.  Thousands of words excreted in patterns and games with particular focus on hurried recitation, where the eye, mind, mouth go their separate ways.  We have recorded out first album.

Event scores seemed a natural way to go, as they connect all the dots – they are music, they are instructional, they are poetry and, like fractals, can create infinite complexity from absolutely maximum simplicity.  They span the spectrum from modest to grand and can be interpreted to suit the performer/participant.  Perhaps, most importantly, they have a home within the world of Fluxus, which gave me the freedom and allowed me the permission to do many of the things I have done.  My definition of music is:  The creation of sound, however conceptual or minimal, as a direct result of an instruction being followed through.  This makes a separation of music as I see it and, for example, nature.

I have curated and created several large scale happenings, basically massively exaggerated everyday street scenes – many different people doing different things at the same time, regardless of the other’s existence and with no idealistic view of the whole, except perhaps conceptually. Apart from the practically inhuman logistical organisation, these events are really challenging and surprisingly unnatural – nobody really knows what they should be thinking or how they should engage – it’s difficult, but, like with any art, an observer should always be prepared to accept the absolute minimum or, as is the case with me, the absolute maximum – an open mind is detrimental to really forming an opinion and the pleasantly surprised have learned nothing ultimately.

Global activity is now possible thanks to the internet and social networking sites, it’s easy to connect people from disparate locations – it’s just a matter of time and labour.  I’m spellbound by the idea of a conceptual web connecting people, who might be doing seemingly insignificant activities but on a global scale, which can be put together in film and photographic documentation to view – but it can never be experienced in full – this limitation is one of the attractions .  666_events will be my third worldwide performance happening, taking place everywhere from the 23rd to the 28th January 2012.  Each day participants are invited to interpret a single event and perform it 111 times – there are no rules, restrictions or regulations and performances can be planned meticulously in advance or spontaneously improvised on the day.  Details and links can be viewed here: www.sixhundredandsixtysixevents.com

Check out Matthew on the Guest page