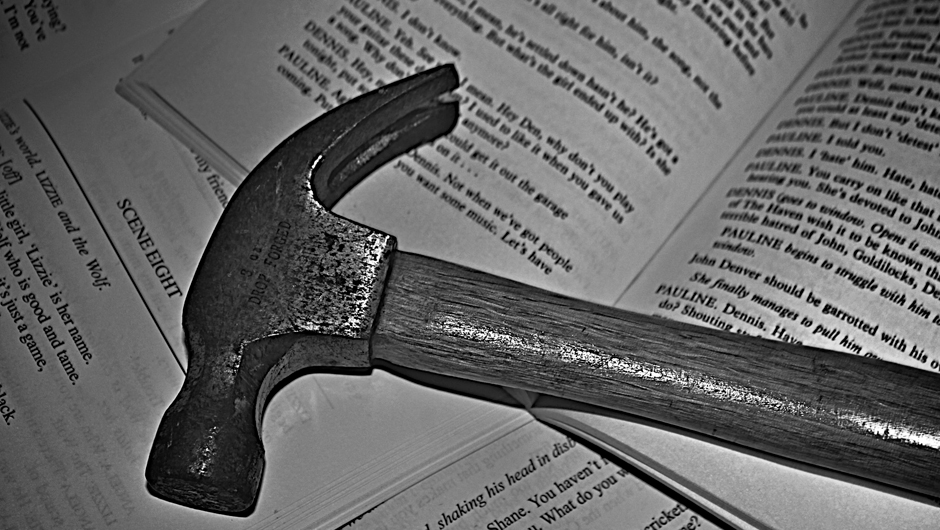 I consider myself to be someone who writes plays. Yes, if someone asks me what I do I’m quite happy to respond by saying “I write plays”. I am not, however, comfortable with calling myself a “playwright”. If I’m asked what I do I’ll happily explain myself as a writer. I’ll do this without feeling the desire for such stark honesty as to list the innumerable odd jobs I have strung together to pay the bills in my career history. That would just be embarrassing for everyone involved. The question asker would just have to struggle to find a response to the statement “I tear tickets on Thursdays and Saturdays and I walk dogs on Tuesday and Fridays” and wish they hadn’t asked the question at all. Explaining that you write, but that you make your living by doing telephone-sales for a roofing company during business hours sounds far too limp and cumbersome to me, and it is invariably taken that you’re “in sales”. Above all, any response other than “I write plays” would mean that I would have to glimpse a fraction of my deepest, darkest fear that I am actually not someone who writes plays, but a dead-end shift-worker with a hobby. No, it’s best for all involved if I assert that “I write plays”. Even if I suspect that I don’t deserve the right to say it.

“Playwright”, to my mind, is a title that has a totally different resonance to it. I don’t know that I can explain the difference terribly well, except to say that Shakespeare was a playwright. Beckett was a playwright. The delightful Michael Gow is a playwright … I write plays.

I distinctly remember one of my lecturers at Sydney University, standing before a lecture theatre full of Performance Studies students. It was his first class with us in our first year. He had that sort of passion for what he was teaching that meant that you couldn’t help but be excited about it too. That was coupled with the sort of confident charisma that meant, even if you weren’t swept up in his excitement, you knew you wanted to be. He stood in front of this class and he said “Playwright, dear friends, is spelled p-l-a-y-w-r-i-g-h-t … that’s ‘w-r-i-g-h-t’ not ‘w-r-i-t-e’ … you see, a play is not written … it is wrought!”. As soon as the words had left his mouth and its corners began to rise in a knowing smile, I was captivated. It felt like the most profoundly correct statement I had ever heard. It was a fundamental realization. It was right. Wright! In the true style of someone who writes plays, I proceeded to rip that speech directly out of his mouth and shove it firmly into the mouth of the lead character of my new play. It has been wrought.

When my new husband was offered a 10 month contract in Borneo at the beginning of the year we both leaped at the idea. It presented a chance to travel, to save money, and I would be given the freedom to “just write”. What a fantastic opportunity that is. It’s a dream come true for any artist – to be allowed to simply practice your craft without necessity for producing income.

Of course, I am a woman who is on verge of leaving her 20s. Right on the verge, as a matter of fact. My career as a writer of plays and a theatre practitioner has been forged predominantly under the Liberal Government. While my artistically driven parents and their friends made me keenly aware that the halcyon days of the Whitlam Government had meant that creative pursuits had once been validated in ways I could not imagine, I have always been clear that those days were not occurring now. Government funding to the arts, education, and public health slipped into oblivion in my formative years. So I have the sound knowledge that an opportunity to go to Borneo and “just be a writer” was once-in-a-lifetime. I am also blessed with that pervasive understanding, shared with most of my generation, that the arts are seen as an invalid career. It has no “real” value. This has been evidenced by my aforementioned patch-work employment to subsidize my writing and performing. And it is further punctuated by the fact that it is, quite simply, difficult to get paid for creating something.

Armed with this background of passion and deathly realism, I thought “of course I’ll need to do something else while I’m over there! Something valid … so that when I return and people ask what I did for 10 months, I won’t have to watch them squirm while I say, “I was writing”. If I was writing and something was happening with that writing well, that would be different. But to arrive home after 10 months and say “I have written a new play” would invariable mean I would have to answer questions about what was going to happen with that play. After all, what is a play worth if it isn’t produced? No, no, I would also enroll to take a course to become an English teacher while I was there. Yes, the stroke of brilliance to subsidize my career in the arts with a career in education. Genius.

So, I’m here, in Borneo. I have taken the wise words of Julia Cameron* and I spend each morning writing for at least 2 hours. Writing anything. Just writing. Because I am a writer.

The remaining portion of my days are spent struggling through a distance education course to gain a TEFL Certificate (Teaching English as a Foreign Language). Now, don’t get me wrong I’m positively thrilled at the prospect of teaching English. I think it’s the perfect “other job” for someone who writes plays. I mean, I’m a word person. I fancy the idea of being a wordsmith. The same way as I aspire to being a playwright. However, yet again I find myself with a hovering concern about the worth of my career choices. It is, after all, incredibly difficult to get paid much to teach.

Here I sit in wilds of Borneo beavering away at a career that essentially has no real financial value in Australia. I’m writing an article for an Australian arts website, and I’m thinking, ‘what relevance does my tiny, inconsequential, un-financially-viable life have to an Australian arts industry readership?’ … ‘what am I even trying to say?’ … But a truly wonderful realization washed over me in the face of these questions: I am a writer. I write plays. I write. It’s not my job to decide the value of what I’ve written, it is simply my job to write.

So the point of this whole article is entirely up to you. It has value because you’ve invested your valuable time to read it. That has to be enough for me. I have wrought, and you have read. Perhaps there is no point. It’s possible that little Johnny Howard is correct and there’s no value here, but the work has been done. It has been forged, and here it is. I feel myself being one step closer to being a real wrighter. And for that, I am more grateful to you than I can say.

* Julia Cameron is the author of “The Artist’s Way”