What Does It Mean?

Georgia Keighery > Blog > Blog > What Does It Mean?

Every now and then life will lean over and slide an ace across the proverbial table just to prove that, although I’m enjoying playing and we’re letting me feel good about it, I am clearly not in possession of a full deck. In fact, as life nudges me in the ribs to make sure I’ve seen the ace, I’m reminded that I’m not even sure if I know what the game is. These little moments are very good for leveling my got-it-all-figured-out-thanks-Jack ego.

Just down the road from where I live in Singapore, there’s a row of newly renovated shops that have been getting fitted out. Singapore is like a Mecca for the purchase-driven, so this isn’t news at all. What does deserve attention is this: as I went past there last week I noticed that one of these shops had just finished its signage and looked almost ready to open. Upon second glance I noticed the name of the shop in black lettering above the window. The shop was called “Porn’s”. I snickered to myself in the way that only an obnoxious ex-pat can when they think someone’s English has unwittingly embarrassed them. Yes, I snickered, and I kept right on walking past.

Two days later I went past Porn’s again and noticed that they’d added their logo to the shop front. Everything has a logo here, even the pets, so this was not news either. What was interesting (and by “interesting” I mean “disturbing”) was that the logo was of an elephant’s arse. Yes, that’s right, an elephant’s chocolate starfish. I kid you not. This time as I walked past, I snickered in a way that only an obnoxious ex-pat can when she’s increasingly concerned that there’s something she’s not understanding. I wondered what the hell these people were going to sell. I became convinced that I would need to get one of whatever it was right away, and I picked up the pace as I scurried past.

My final pass of Porn’s shop happened last night. As I went past I looked up at the huge elephant’s arse next to the shop name, and I realised that they’d painted their slogan onto the window. The slogan was born to rule in Singapore, so the fact that this place has a slogan is nothing in itself. What is something however, is what the slogan said: “Seductive Sea Food”. Yes, that’s right, Porn’s, with the elephant arse logo, is a seafood restaurant my friends. Not only that, the seafood is somehow “seductive”. Given the elephant-rectum logo, I shudder to imagine to whom it is seductive, but apparently it is. What’s more, Porn’s was open and it was PACKED OUT!

As I looked at the shop front my heart began to race. My head cocked to one side, my left eyebrow raised involuntarily, and my brain began to silently scream “But what does it MEAN? … The name, the arse, the seafood? WHAT DOES IT MEAN?” … I wanted to run inside and begin throttling people while I asked them how they could stand the ridiculousness in there. I wanted to burst a reason-gasket. I wanted to squeal like a banshee until someone came out of Porn’s to explain it to me!

… Then, everything suddenly went quiet. As I stared at Porn’s Seductive Seafood something snapped inside my tiny mind, and a moment of clarity occurred. That moment included a Johnnie-Cochran-sounding internal voice saying “this does not make sense”.

Sing it out brothers and sisters. It does not make sense. At all. 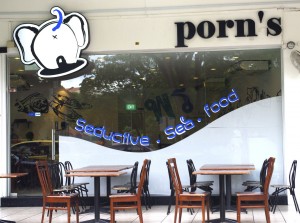 I realised, in that eerie silence in my mind as I stared into the glassy veneer of Porn’s, that trying to work out what it means was just making that blood-vessel in my eye pop out. Trying to make it add up was just causing me some sort of aneurism. Getting caught up in my need for Porn’s to be anything other than unsettling, disables my ability to enjoy it for what it is. Whatever it is, it’s doing it now. Whatever it means, it’s meaning it now. And I’m just missing out on the fun by being all about logic. Clearly.

I did the only thing I could think of doing. The only appropriate response to such an impressive play as this one … I stood back from the shop and I applauded. I clapped my hands and shook my head vigorously in appreciation.

Inside I could see various groups of diners squinting through the glass and snickering like only dinner-eating restaurant patrons can when there’s a crazy lady outside the window clapping and laughing.

2 comments on “What Does It Mean?”