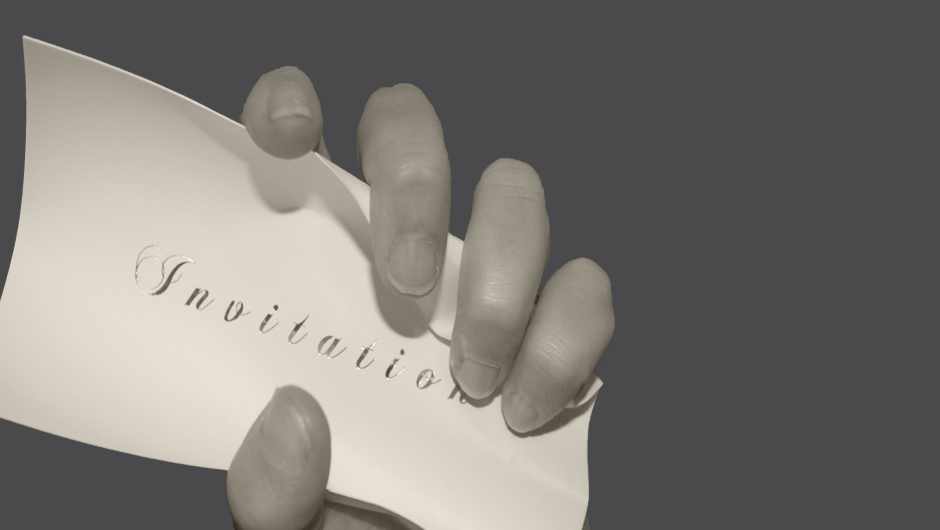 It always started the same way: I walked into a huge party. The party was in my honour. Of course it was. And I looked AMAZING. Of course I did. And as I flitted around the room being generally fabulous, I caught snippets of people’s conversation as I walked by. Every single chat revolved around me, and how gorgeous I looked, and how well I was doing, and how much everyone adored me. Of course they did.

That was the fantasy.

I began work on that little gold-mine of mental delusion as an overweight, spectacled, splotchy-skinned 12 year old. I held on to that dream, imagining it to be imminently possible, for more than 20 years. I would use it as a dangling carrot. Not only was it possible, but it was soon – not too soon, of course, but just as soon as I lost weight, became renowned and got stinking rich from my unbridled success. That would be soon. Not now, of course, but soon.

I’m not ready yet.

From the insane ego-monster reveling in that dream-world it was only ever a short step to the part where I realised how far I had to go before I was ready. I could look in the mirror and see the difference between reflected me and imagined me. We were never terribly similar. Of course we weren’t. I’d need to slim down more than a few dress sizes, get a boob job, become blonde and get taller.

From the mirror comparisons, the next stage was always creeping isolation. I don’t want to see people when I’m this overweight, bad-skinned and unsuccessful. Of course I don’t. So I start saying ‘no’ to going out, because I look terrible in everything and I have nothing of worth to say because I’m not successful yet, and besides that I can go out all I want WHEN I’M READY.

At this point I could finally be left alone with that malcontent disciplinarian inside my head. Her voice was always constant but at this stage of the game it grew deafening. And slowly slowly the grotesque, deforming, debilitating, exaggerating, gluttonous, ridiculous, hilarious, horrific, sad sad self-induced illness would come.

Just me and the beast and no distractions. I was never ready.

Today I won’t eat anything because I need to take some drastic action to deal with the totally out of control mutant that I’ve become yes I have a long road to get to Ready from here and we all know that anything less than the Fantasy Party becoming a reality is total failure on my part and a probable reason to surrender to my worthlessness and die but I’m hungry but really I can’t eat because I’ve eaten too much to date obviously and I’m foul but I’m starving hungry and I have to survive but I can’t be trusted with food but seriously I’m STARVING oh alright you can have one little serve of that stuff but just one oh the relief fabulous but if I’m honest I ate too much and I know it maybe one serve would have been alright if you weren’t the gargantuan slobby failure that you are but you are and you ate too damned much well if I’ve ruined it I’ve ruined it there’s nothing to be done now I’ve proven myself right I am hopeless and so as a hopeless case I’m going to eat that other thing i saw in the fridge and if I’ve eaten that then I may as well get some of those other things I’ve been craving and make a proper mess out of it seeing as I’m in Loser Town already may as well do the proper tour and while I’m at the shop I may as well get that other stuff I saw someone eating the other day that made me jealous and some of the stuff that I never like to have because it makes me feel horrid and some of that stuff, and some of that, and some of that …

And then the sickness would take its usual turn. Of course it would. It was ready.

Chuck would come over. Uncouth, disgusting, repulsive, self-torturing, insidious Chuck. And I would always swear that it was an uninvited entrance, but the dirty truth was that I greeted that visit with a profound relief. A release. A fresh start.

Chuck wasn’t a guy. Of course it wasn’t.

Of course it wouldn’t.

But here’s the thing, I’ve torn up my invitation to that stupid, self-defeating, ego-festering Fantasy Party. And not because I’m ready. Of course I’m not. I’m not ready. I’m not ready, my life isn’t ready, this column isn’t ready. They never are! I’m not successful enough and I’m not perfect enough and I’m no where near skinny enough for that fantasy. And I never will be. I can’t hope to attend that party and like myself at the same time.

8 comments on “The Ready Cycle”