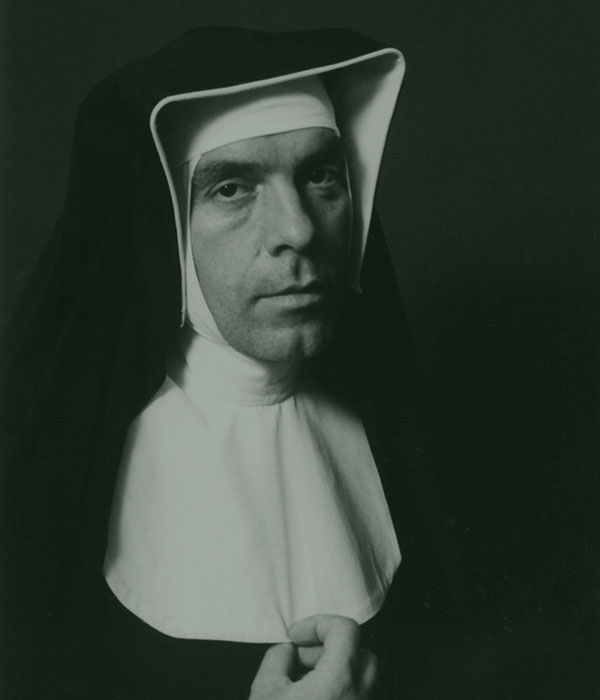 In the bedroom of a religious-relic-laden house in Sydney, a sister begins the closely guarded ritual of donning the nun’s habit. Over neatly pressed underwear, a voluminous black tunic with immense sleeves, is slipped into, leaving the body entirely covered, neck to floor. Over that, the scapular. With well-rehearsed flicks of the wrist the white wimple is tied at the back, leaving only the face and hands free of covering. In quick, graceful succession, the white starched circular bib or “guimpe” and the “bandeau” are added… A pause for reflection, and gentle adjustments… Finally, in crescendo, the black veil is drawn up and over, and pinned with large pins at the crown of the head … “To keep it neat”, is the smiling explanation. Turning and checking everything is in place in the mirror, the vision of this Franciscan nun inspires a little awe. This ritual dressing would inspire one to applaude, if it were appropriate. It isn’t. There’s too much majesty in this image. And this Nun’s cleft chin is so carefully shaven that you’d almost forget you were looking at a man. Almost. He turns and smiles in way that it is at once reverent and wry.

His name is Fabian LoSchiavo, but that’s when he’s not in habit. As Sydney prepares itself to receive more than 21,000 visitors to its annual Gay and Lesbian Mardi Gras Festivities, there are thousands of rituals in action. In excess of 300,000 spectators are preparing to line the parade route. Approximately 9,500 parade participants are rehearsing, sewing millions of sequins, and painting 130 or more floats. One Fabian LoSchiavo is also prepared. A presence at the march since the Mardi Gras’ 1978 beginnings as a gay civil rights protest. He has been an activist for more than 30 years. A founding member of the Sydney chapter of the Sisters Of Perpetual Indulgence, LoSchiavo has enrobed to manifest one Mother Inferior. Mother, the image of reverent Catholic devotion, is one devoutly emancipated nun. Mother knows the parade route almost as well as the rosary. Almost. As the parade winds its way through Sydney, it may be easy to forget that it didn’t begin at Hyde Park. Maybe it’s not easy to remember that it didn’t begin with a crowd of thousands dancing and celebrating. Maybe.

In the hallway outside the bedroom where Fabian has been dressing hangs a large oil painting. A prized possession, it depicts a young friar who looks, in the gentle owner’s words, “young and scared and pious”. He would know. In 1969, as a 20 year old, Fabian entered into the Premonstratensian order as a monk. Man was landing on the moon, the Beatles were breaking up, Nixon was in, and in June, the Stonewall riots began in New York’s Greenwich Village – the modern gay rights movement was being born. Devoutly Catholic Fabian turned to his religion to free himself of the homosexual thoughts that plagued him. He left the order in 1972. The round of electric shock treatment, or “aversion therapy”, a year later was a similarly “unsuccessful cure” for his homosexuality. Years of personal struggle between his sexuality and his religion followed. Pious and afraid.

In 2011 Fabian wants Mother Inferior to travel the Gay and Lesbian Mardi Gras parade route in an 18th Century sedan chair. The sort that was once carried by servants. A regal litter. “Do you know, that papal chair was still being used as late as the 1960’s by the Pope?”. He adds “It was discontinued because the modernists in the church saw it as antithetical to “humility”…” he pauses and suppresses a smile. Fabian LoSchiavo brims with such historical fact. Among other things, he is a dedicated archivist for the NSW State Records. Pop in there and he’ll help you explore the humility of your own family tree. Thinking of the now defunct sedan chair and the uptake of “humanitarianism” in Catholicism Fabian reflects, “the modernists took away all the good bits: Latin, papal chairs and tiaras, big robes and cloaks, water wave moire silk, hand-kissing … All the old pompous, glorious, extravagant stuff has been mothballed or museumed.”

Reveling in the pomp and ceremony of religious regalia, the first order of the Sisters Of Perpetual Indulgence (SOPI) was founded in San Francisco in 1979. Unaware of the San Franciscan developments, LoSchiavo was in Sydney enjoying dressing in nun’s habit, fashioned “from homemade things”, during the late 1970s. As a University of New South Wales student he attended a retreat with the Gay Society. He attended in habit. “It was fun” he recalls. In 1981 LoSchiavo heard Gary Schleimann on 2SER’s Gaywaves radio talking about a group he was part of called The Sisters Of Perpetual Indulgence. Fabian made contact with Gary, and the two of them formed the Sydney chapter of the SOPI the same year. LoSchiavo recalls that they “asked the San Franciscan sisters could we use the name and motto “no more guilt”, and we had interest right from the beginning. Sister Medusa and me, then Sister Sit On My Face and then lots of others. Especially clever left-wing nuns like Sister Third Secret Of Fatima. We started appearing at rallies against the religious right and started getting a lot of media attention – it was considered absolutely outrageous and a mockery of religious sensibilities. In parliament they even considered some kind of law to stop people dressing as nuns” he remembers with a smile. “It was all the rage. The order increased by dozens. By the late 80’s we had 35 members” that wry smiles flashes again as he adds, “and it boomed and we became famous!”. Divine fate, as it were.

The Sydney Gay and Lesbian Mardi Gras began its life in June of 1978 as a gay rights demonstration and commemoration of the Stonewall riots. Despite previously granted permission to protest, the state government revoked the protest’s approval, and the police intervened on the peaceful march, arresting 53 people. Names of those who were arrested were published, outing them to friends, family, and colleagues. Homosexuality was illegal in Australia until the 1980s and many of those arrested lost their jobs, homes, and loved ones as a result.

The arrests in the 1978 march eventually resulted in adjustment to legislation regarding protest rallies, but LoSchiavo, and many others were still enraged about the injustice. “I was caught up in the sense of belonging and anger and excitement of not being scared or apologetic anymore … I was furious that the police responded the way they did” he says, “The next day I tied two broomsticks together and put up the pink triangle flag from out of the kitchen window as a way of expressing outrage”. This man, young and pious, was becoming unafraid.

Not that fear can be said to have dictated the choices of the apparently timid LoSchiavo. At that first rally, Fabian carried a banner that read “Gay, Free and C of E” to proudly declare his Church Of England religion. Apparently, one noted gay liberationist stopped him as they marched and barbed, “Who do you think you’re fooling? We don’t need people like you here”. Standing for your right to be free from oppression regardless of your sexual preference, that’s one thing. Trying to fight the church is another thing entirely. Although the Sydney SOPI wouldn’t be formed for another 3 years, LoSchiavo was clearly not deterred.

In 1983 the Sydney Sisters picketed a visit of right wing Christian Jerry Falwell at Ryde, and gained their first media profile in mainstream newspapers and television. Demonstrating against Pope John Paul II in 1986 Mother Inferior and her friend Peter Collard were arrested while chanting in protest, “anti woman, anti gay, fascist pope go away”. The case was proven, but the magistrate directed no record. Homosexuality had become legal in the state of New South Wales less than 2 years prior. In 1985 “Encounters”, an ABC religion department TV program, featured Fabian as Mother Inferior. LoSchiavo was disowned by his extended family. He recalls the show fondly however, “People, isolated gay and lesbian people, wrote lovely letters saying that it helped them ‘be themselves’” he smiles. When pushed to declare his pride in the impact he’s had, he shrugs “I was proud of that”.

In more than 25 years of sisterly devotion, one must expect a few incarnations of character to occur. “I started my nun’s life as Sister Volupta. But the others called me Mother Inferior and it stuck” Fabian explains, “Then at my 40th surprise birthday I was ‘elevated’ to the rank of Mother Abbyss… I like Mother Inferior, but the old nun is really a bit dithery and contemplative…Decorative, but humble. Patting little children on the head and being grandmotherly” … Except, of course, when the NSW state government passed a certain legislation in 2008. World Youth Day had attracted 223,000 young Christians to Sydney from 170 nations across the world to celebrate their Catholicism. This fact didn’t disturb LoSchiavo, himself a practicing Christian, in the slightest. What tormented him was the legislation recently passed to criminalise anyone who does “anything to annoy the pilgrims”. Mother Inferior was unimpressed, “never aggravate Mother Inferior’s democratic right to protest peaceably. NEVER do that! Mother Inferior then assumes the powerful mantle of Mother Abbyss!” explains LoSchiavo. And Mother Abyss did respond: she marched the 3.1 kilometers from Taylor Square in the city centre, to Circular Quay in her most formal habit, carrying a placard. On the sign, in her carefully executed lettering, Mother had written only one word: “ANNOYING”. Mother walked silently and alone.

LoSchiavo is a deeply religious man. He heads the choir at the parish he’s been attending for more than 30 years, and he co-founded Angays, a group for Anglican gay and lesbian support and lobbying in Australia. Asked how his religion and his life as Mother Inferior can be consolidated, he answers simply, “I have no great problem with Mother Inferior and the very Church of England Fabian Lo Schiavo co-existing. If people have a problem,’how can you be both?’, then that’s their problem. They are the same person after all…they just look and act a bit different”.

Back in the house LoSchiavo has finished dressing, and his usually demure expression seems even more fitting as he emerges as Mother Inferior. “We usually carry a whistle, and our bus money, and a large, clean, black or white handkerchief in the pockets concealed in the tunic” he says. A little-known nunnish secret. Mother smiles at her disclosure and adds the final touch to her habit – a pink triangle badge which she gently pins to the scapular. The bus money is for the bus. The whistle is there to alert passers by if an attack occurs. This was a more regular occurrence not so long ago. Sydney-siders have become more accepting in the last 30 years it seems. Mother has been a big part of the crusade for that acceptance. But the whistle remains. In its secret pocket … One might be tempted to ask why the handkerchief had to be black or white, if it were appropriate. It isn’t.